I’m sure you’ve heard in the news this week about GameStop – the Reddit traders who through Robinhood and various other platforms have been driving up the stock of GameStop to incredible Heights. 2500% above the beginning of the year. What on earth is going on? And should you even care? 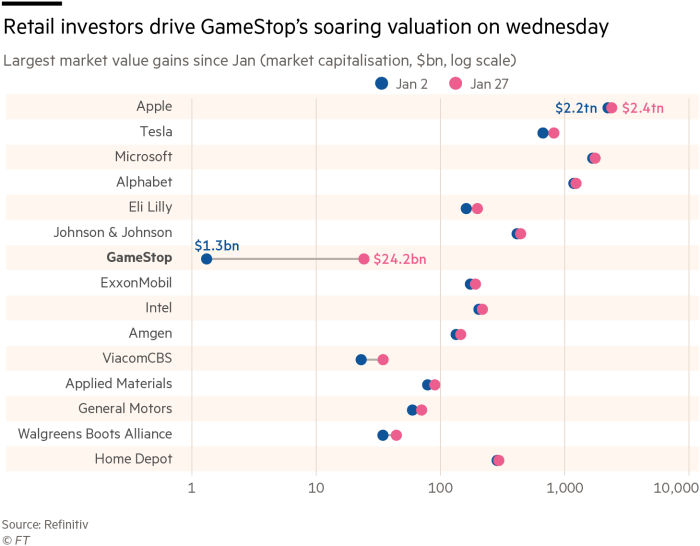 A lot of Interesting things have been happening with GameStop, and also a couple of other firms, that really bring to us the intersection between social media, the hedge funds, the clearing houses and the retail accounts. GameStop. What do we know? GameStop started the year at $18.84. On Thursday it had a $28 billion market cap at $483. Yes, that’s up almost 2500%. And then yesterday (January 28th), Robinhood – AND major brokerages – basically told retail investors they could no longer buy any more. Horrors. The hedge funds can continue to trade this but the little guy can’t? “This sounds like a bit of an inside conspiracy. This is not fair.” At least that’s the narrative that’s gone out. What really has happened?

Well, let’s talk about Reddit. Reddit is just an online blog. In fact, there’s a number of them. The blog in particular, it’s called r/WallStreetBets. It’s a social blog; a form of social media for investors. When we look at retail trade flow – meaning little guys’ purchases through all of the different brokers through the clearing houses this week – we actually find it’s quite balanced. So this week, especially, this hasn’t been a retail-only boom. What it’s been more of is what’s called a short squeeze. The massively increasing price led hedge funds to sell stock they didn’t have with a view to buying it back later cheap. We won’t get into why, but it can be very profitable. The problem is the stock kept going up and you have to close those trades. So actually, it does appear that the short squeeze led the hedge funds to buy even more this last week. They got annihilated from a profit point of view and the stock went up even further.

But why would Robinhood shut down this? That ostentatiously is to protect the little guy, but I think it’s important to follow the money. This has nothing to do with protecting small investors. Robinhood, and other brokers, make money from transactions. The last thing on the planet they wanted to do was to shut down transactions for the sake of the hedge funds. Heck, the hedge funds usually bypass them. They get nothing out of that. What it really came down to is something called credit risk. When you buy or sell a stock, you have what’s called T+2 – two days after the transaction, as a settlement, money trades hands. Now in day-to-day transactions, especially with margin requirements, that this is just part of the lubrication of the markets. It’s mechanics. People don’t even know what it means, but when we’ve got to stock that’s trading probably at 10x, maybe even 20x its true value… And therefore the possibility that in a two day settlement window, the market could wake up to reality one day and it lose half its value. And a number of those investors may be small traders who will not make good on the transaction, who will not pay what they were supposed to pay for that stock that they bought before the collapse.

What you have is credit risk that you don’t normally have in markets. And what happened, was an organization called DTCC, which really is the plumbing of the markets, reached out to all of the brokers and asked for additional $33.5 billion in additional collateral to protect the trades that were going on out there. Well, that’s not chump change. And Robinhood, it’s a small startup company. It’s not as small as it was a year ago, but it’s still small. So to protect against credit risk. Basically Robinhood, until they came up with the collateral, wasn’t allowed to make transactions. No conspiracy, nothing evil going on. They just ran out of credit. They went out, and very rapidly from investors raised another billion dollars. They got the money back in the system. They’ve got the credit, the trades of back on. Already, the stock’s down over a hundred dollars. So anyone who couldn’t buy it yesterday should be thanking their lucky stars. But don’t be confused. This wasn’t to protect the little guy. It wasn’t to protect the hedge funds. It was because they ran out of collateral. It was a purely mechanical issue.

But it does bring up some additional interesting topics. What about the hedge funds? How come they got to make trades? Well, they’re not always working through the same clearing houses, where they already have their own collateral arrangements. So they do play by the same rules, but with different players. And trust me when hedge funds run out of collateral, it gets very ugly for them. It has happened in the past – the most famous case being Long-Term Capital Management. If you have time, Google it, read the story. It’s a great story. And it didn’t end well for the hedge fund. But what about Reddit and the blog? The social blog r/WallStreetBets. Well in essence, r/WallStreetBets is fundamentally a social pyramid scheme. This is a social blog where people are getting together and they’re getting hyped up – the power of social media – and they are basically buying what is affectionately known as the greater fool theory: that if enough people circulated, they’re going to keep watching the stock rise and they’re going to get out before the poor schmuck buys the thing at the wrong price. This is a pyramid scheme. The only reason it’s not illegal is it’s not organized by one person who profits. It’s a social pyramid scheme. It’s not even illegal, but it does raise questions because we’ve never seen anything like it before.

And what do you do? I actually would make the cases nothing. You can regulate everything to death if you try hard enough, but moral hazard works better than any regulation. And if you get two or three situations like GameStop, where the stock hits almost $500 and then drops to $5 – trust me, people learn their lesson. And yes, there will be losers. Without risks there cannot be reward. And really, can you honestly tell me with a straight face that you didn’t know that a stock trading at 20 times, 25 times its value three months, ago was really worth 25 times what it was three months ago?

I know that may sound callous or unfair, but these are the questions that only the legislatures or leaders can make for us when they’re not busy working on much less important things. So, what we’ve learned is don’t ever underestimate the power of social media, social blogs, and their impact on financial markets. Where is the harm? Well, I still wouldn’t be putting money in GameStop right now. The highest estimate for its true value was $33 by one analyst firm. So it’s got a long way to go down. Maybe it what’s more scary is so do a lot of the other tech stocks. Be careful out there. We wish you the best of investing success.