How Will This Election Year Affect the Markets?

How will the presidential election impact the markets? There’s a lot of concern out there. Every four years, I feel like I have the same video. Though this one is a little different. Every four years there’s this concern over markets. Democrats are afraid of what happens if the Republicans win; Republicans are afraid of what happens if the Democrats win. But as you’ll see in the attached chart, markets clearly don’t care who’s going to win the election. Possibly a more accurate statement is markets are fairly good at discounting the election outcome. Given how close we are to the election right now, it’s increasingly likely the markets have already priced in the outcome. What’s interesting though, is politics and economics and the markets all tend to live in separate parallel universes. In many cases, they are totally uncorrelated. This election is particularly heated. There’s a deadly pandemic you might have noticed. There’s a global economic recession that is really quite serious. There’s widespread civil unrest in many countries, and there’s extreme market volatility coupled with in many cases, extreme valuations.

But the thing to keep in mind is markets are increasingly divorced at this point from economic and political reality. In what has been a historic Keynesian response, the lessons learned after 2008 have really put to rest much of the debate about quantitative easing. In fact, to the extent there is a debate nowadays, it’s “How do we end it?”, not “Do we do it?” But one side effect of the historic quantitative easing that, frankly, was a little unexpected to many commentators is the government has effectively bought the market. And this is a challenge because now we have extraordinary valuations. And extraordinary valuations that are out of touch with reality result in fragility. We’re in what may be called “Black Swan” territory. And as quantitative easing subsides, as it must eventually, that leakage of funds into the market will stop. It’s hard to imagine how this will end well. Of course, one lesson hard-earned, especially recently in the new world order, is that markets in the short term, frankly, don’t give a damn. We cannot deny the fragility of what’s going on in the financial markets today or the economy or the political universe. Though they are somewhat uncorrelated in sense of their timing of the response, but either way, caution is still the order of the day. But not because of the election. We wish you the best of investment success. 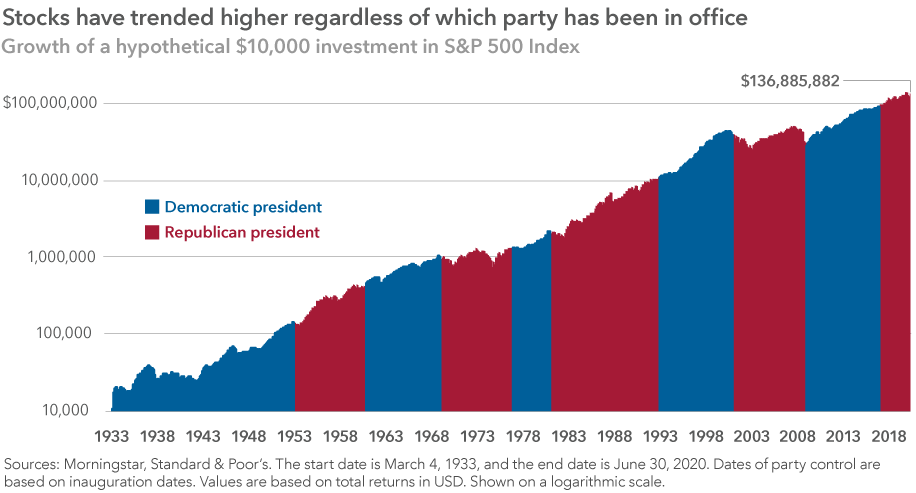 Next post: What's Next for the Cares Act and the Economy?